Dr W. Edwards Deming was adamant the people have a right to enjoy their work. They have a right to be treated with dignity and respect. Point 8 of his 14 points: Drive out fear.

Whether you are a school leader, classroom teacher, support staff member or student, you have a right to a fear free school. Easier said than done.

Systems and processes can create fear

The systems and processes in many organisation increase fear and anxiety. These include:

Fear has a way of creeping into organisations, even those that seek to expunge it. Vigilance and effort are required.

Our challenge is to create schools and classrooms where people feel safe and secure. This is not to suggest creating an environment free from responsibility or accountability, rather an environment of respect, dignity and professionalism.

You can begin by asking your staff (if you are a school leader) or your students (if you are a teacher) what causes them to feel anxious or fearful in your school / class? Then work with them to remove these barriers to joy in work and learning.

Who is to blame when things go astray?

He analysed the causes over a defined period of time. Each of the causes were categorised as “management-controllable” or “worker-controllable”. Worker-controllable defects and nonconformities resulted directly from the actions of the worker. Had the worker been doing his job properly these defects and nonconformities would have been prevented. Anything outside the control of the worker was categorised as management-controllable. This included factors such as inadequate training, poor machine maintenance, sub-standard materials, and equipment deficiencies. In other words, anything that is outside the control of the worker is caused by other factors within the system (or the containing systems), which is the domain of management, not the worker.

Wherever there is a problem, 85% of the time it will be the system and not the fault of an individual.

In order to bring about improvement, this finding requires us to turn our attention to the system, rather than focus upon individuals.

In social systems, such as schools and classrooms, behaviour and performance are dominated by the impact of structural factors rather than the actions of individuals working within the system.

When placed in the same system, people, however different, tend to produce similar results.

Working on the system

In most schools, the distribution of student performance from one year to the next remains fairly constant. Students in any chosen year level tend to perform similarly to the students that went before them. Teachers’ mark books from year to year look remarkably similar, only the names are different. This is an excellent example of the system producing the results, not the people.

In order to improve performance, we must understand the nature of the systems in which we operate and focus our efforts on working on the system to improve it.

Exhortations, rewards, blame and punishments do nothing to improve the system. They upset people, interfere with relationships and make things worse.

A colleague of ours, Lynne Macdonald, observed:

Most organisations’ problems derive from the system, not the people. Our best efforts cannot compensate for a dysfunctional system.

Who cops the blame in your school?

This post is an edited extract from Improving Learning: A how-to guide for school improvement.

Over the past 15 years the conversations about school improvement have been changing.

Key observations about school improvement, which were not discussed at the turn of the millennium, are now clearly on the agenda.

However, there are still critical elements that are not yet part of this dialogue. This post reflects upon these important conversations.

What is being talked about

Items now on the agenda include:

The organisational improvement theory, derived primarily from the work of Dr. W Edwards Deming, leads directly to each of these observations. They have been part of our conversations with friends, clients and colleagues for over a decade. We are encouraged that the significance of these issues and opportunities is now recognised.

What is yet to be talked about

Improvement theory also points to other key opportunities that are not yet common in dialogue about school improvement.

It is only students who truly know what helps and hinders their learning.

Unless their insight is accessed, acknowledged and acted upon, attempts to improve learning are likely to be misguided. Furthermore, if all students are to benefit, this action needs to be taken regularly at the local level, in each and every classroom. Simple tools, such as the Parking Lot and Force-field Analysis, provide mechanisms that enable this from pre-school to senior high school levels.

Students can contribute significantly to improving the operation of the school.

Some schools emphasise ‘student voice’ through mechanisms such as Student Representative Councils and Student Leaders. These process, while important, are in no way sufficient. A much greater opportunity lies in having students skilled and experienced in leading and participating in improvement project teams. These teams can apply the Plan-Do-Study-Act learning cycle to directly address opportunities to improve the school. Not only does this approach build the capability of students to personally contribute to improvement (a capability that can be of great benefit to them in their future), it also builds student ownership of the school and classroom while relieving the burden on school leaders, administrators and teachers.

Too much what, not enough how 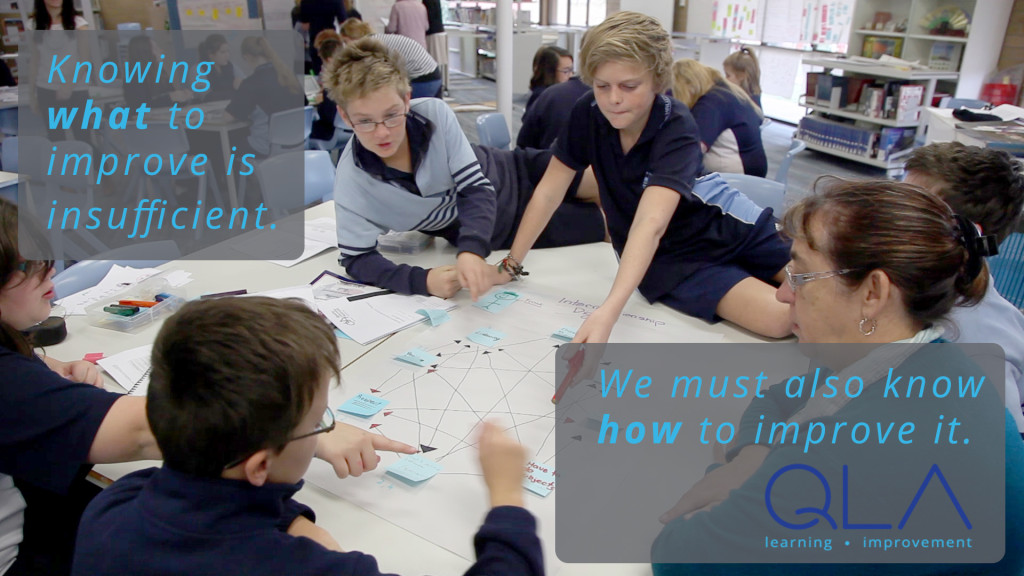 There is far too much discussion of what excellence in schools looks like, at the expense of how schools might achieve it.

Note: Our thanks to Hallett Cove R-12 School, South Australia, for the images, which were taken during QLA facilitated Student Improvement Team workshops in 2014.

We would love to hear your views on this topic. What do you see missing from the dialogue about school improvement?